Image by Dall-E: “Inside of a large factory assembling robots from parts. The scene is somewhat dark with neon lights. cyberpunk style.”

The above scenario works in the case all dependent objects can mark all required functions as suspended. This might not always be the case. Those dependent objects might also be used elsewhere or coming from a library. In this case it might make sense to pass a coroutine scope when initializing those objects. This post describes several methods (also ones which do not work as expected) to accomplish this.

To test all scenario’s I created a minimal application with the following scenario (the basis of the application is the navigator sample from Android Studio). The different scenarios are implemented in separate branches. The link to the source code can be found in the introduction of each scenario.

The button in the home fragment calls the RandomGenerator which generates a random number and set this in a MutableStateFlow. The flow is collected in the HomeFragment and displayed in a TextView.

The diagram visualizes this specific flow: 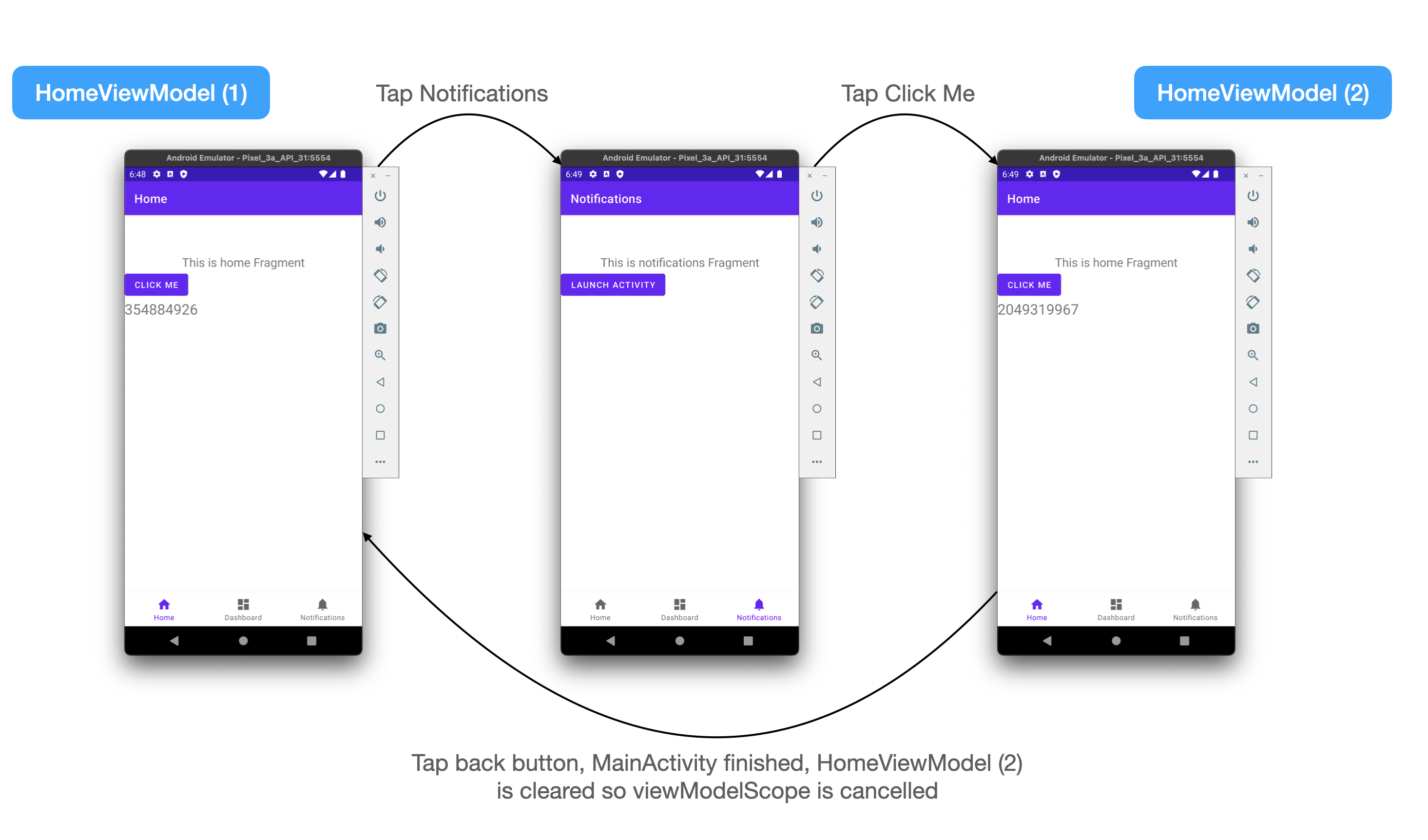 The following class diagram visualizes the structure of the app: 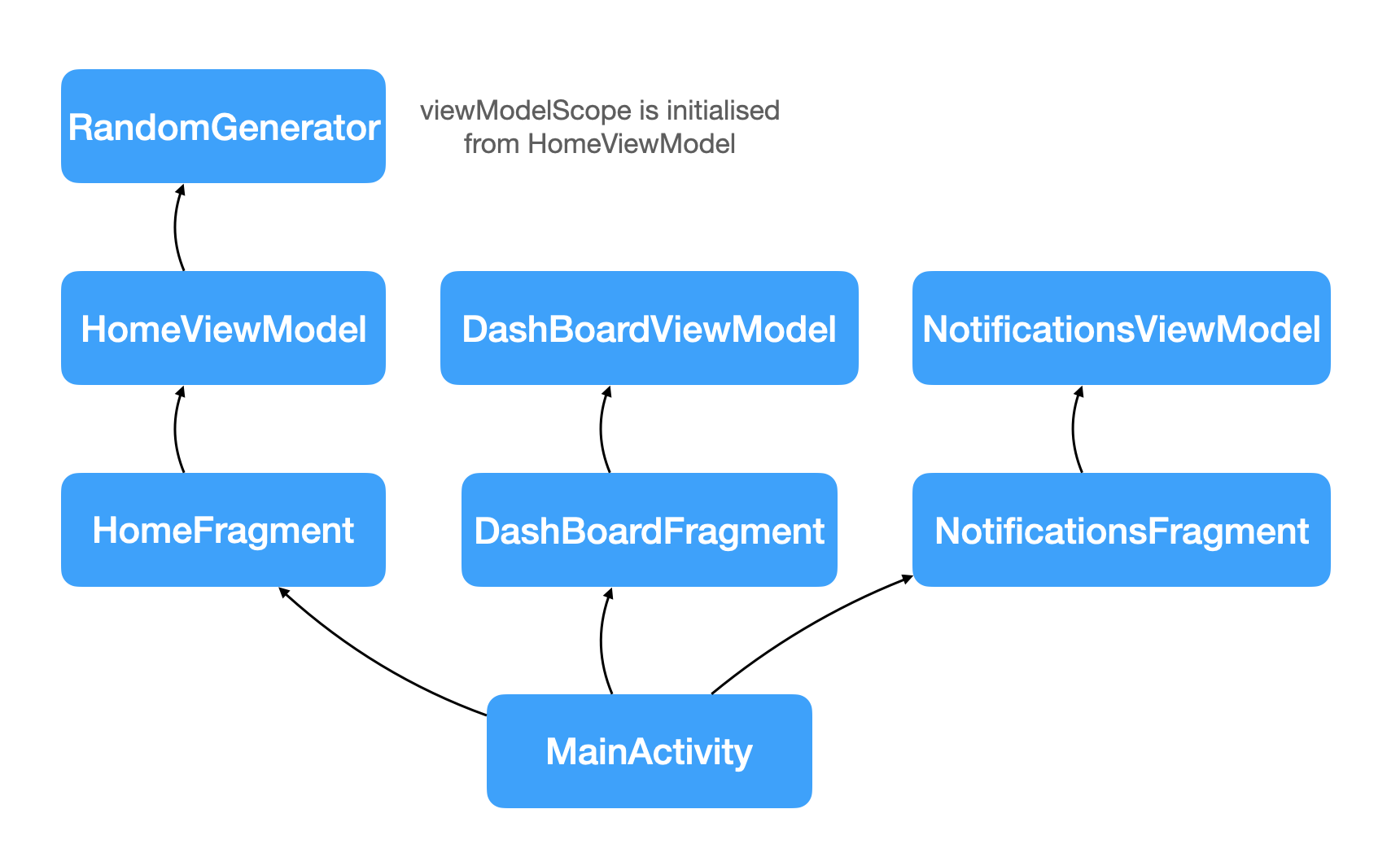 What do we want to achieve:

Println statements are added to appropriate points in the application to visualize what is happening.

Although I am not a strong proponent (although sometimes they have their uses) of a lateinit var, this might be the first thing to come to mind when passing a viewModelScope to a dependent object. The RandomGenerator looks like this:

For inject to work in a ViewModel we need to let the ViewModel implements the KoinComponent interface. What is further important to know is that the RandomGenerator is defined as a single in the Koin module.

If we run the application we see the following output:

The last line shows that the scope in RandomGenerator is not active anymore. This is because when we started a new activity, the original HomeFragment was not destroyed (only onDestroyView was called). Since the fragment was not actually destroyed, the HomeViewModel was not cleared. This means when we go back to the HomeFragment (by pressing back in the newly launched activity), the HomeViewModel is retrieved from the ViewModelStore. Because of this the init function is not called and no new viewModelScope is set. Because we still reference the old one, the scope is not active anymore. Since RandomGenerator is a singleton, the RandomGenerator is a single instance (per koin module).

This is probably not the desired behavior. To make this scenario work, one option is to use a factory for RandomGenerator. This means that every time an instance is obtained, a new instance is created. If this is not an issue, this is an option. If the RandomGenerator is used in more places and is stateless (besides the viewModelScope) this option wastes resources.

Because of the issues above a better solution is to not depend on a lateinit var but pass in the scope as an argument to the constructor.

The definition of the RandomGenerator is as follows:

As seen in the above definition, the ParametersHolder is passed in which can be used to obtain values during injection time. To actually pass-in those parameters the injection looks like this:

Although this scenario works, it is not what we want since in step 2, the RandomGenerator is still the same instance (single) with the reference to the original viewModelScope. Although it seems as if a new viewModelScope was injected, there is not an actual new instance of RandomGenerator created since it is defined as a single.

This mitigation is the same as in the previous scenario, use factory for RandomGenerator. The reasons to not do this are also the same and so this might not be an appropriate solution.

Use a custom scope

You can think of a scope of a window in which a certain object exists. What we want to achieve is scope the RandomGenerator to the lifecycle of the ViewModel (between the creation till the onCleared is called). Koin supports two ways of defining custom scopes: String Qualified Scope and Type Qualitied Scope. In our case the Type Qualitied Scope is used.

The following code defines the scope in the Koin module:

The RandomGenerator is defined as a scoped component in the scope of HomeViewModel. To actually use this scope in the viewmodel see the following code:

To test the HomeViewModel see Koin Testing which describes how to inject objects into tests.

There are cases in which an Android view model needs an object which requires a coroutine scope. There are several ways to initialize the coroutine scope from the view model on the dependent object. This posts described three ways (non-exhaustive) todo this.

For every scenario the implementation is described as well as the pro’s and con’s. Option 1 is simple to implement with the tradeoff that it is easy to forget things or make mistakes. Option 2 utilizes Koin parameters and can only be used if factory bean definition can be used. Option 3 utilizes a custom scope to scope the dependent object to the life cycle of the view model. My preference would be option 3 since it makes it explicit that the dependent object and the view model share a similar life cycle.